How Sports Teams Are Building a Loyal Fanbase in 2021 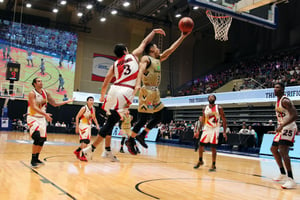 Each year has its defining moments, but 2020 will be one we won’t forget for a while. Who could have predicted just about every sporting event would be canceled or postponed - including the 2020 Olympics!

While they are carefully planned, some sports have returned in a reduced capacity. We need sports. The athletes need them as well as the fans. With restrictions and guidelines on public gatherings, many sporting events have emerged in stadiums, arenas, and fields with few or no fans. Although some teams and organizations are figuring out ways to continue in-person events, the impact of lost ticket revenue cannot be denied. It has been reported that the NFL will lose billions this season due to the pandemic.

Now imagine the many local sports clubs and smaller sports leagues that operate on a shoestring budget during a normal year. Many of these organizations are seeking ways to keep fans engaged by live streaming games on YouTube or Zoom. Those platforms are great for creating interest and providing an outlet for viewing games. Fan engagement is important but generating revenue is just as important which is why it only makes sense to sell tickets to streaming sports.

The good news is there has been increased adoption of content consumed through digital platforms, including pay-per-view sports streams hosted on team websites. Combined with the flexibility of watching when it is convenient for viewers, it seems the online option for watching sports of all levels is here to stay.

For sports leagues looking to stream games online, here’s where to start.

Look for a virtual platform that offers a ticketing solution combined with reliable streaming capabilities. Typically, these platforms will also offer a marketplace to host your content in a controlled access environment. Meaning, they have a paywall that provides an access code to your paying customers or fans. This is a great option for clubs that don’t have a website for hosting their games. Your virtual platform may also recommend a production company or offer tips on how to best capture video for maximum impact. A virtual platform will offer a reliable, professional quality broadcast along with tips and added features to help you promote your games to your fans.

So, how can sports clubs do both – build fan loyalty AND make money? Here are 3 ways to stream sports games AND bring in some extra cash: 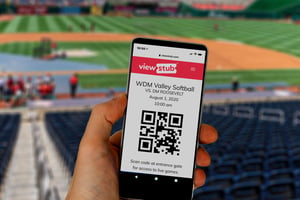 If fans can’t be there in person, live streaming is the next best thing. Streaming games online is the easiest way to make money in the virtual world – just as if the event were in person. Sell pay-per-view tickets to fans so they can watch the game in real time. Here's a great example. See how CISN netted over 39k in online tickets and season passes to sports streams.

Some virtual platforms offer hybrid ticketing that allow teams to sell online tickets to be used for in-person attendance as well as virtual. This is a great option for family members who can’t attend the in-person games, but want that option for future games. Live streaming ensures fans don’t miss a game!

Video on-demand (VOD) allows players and fans to watch or re-watch their favorite games on their own time. Sports teams can store all games in an online library so fans can easily access them for a fee. Teams should consider selling a season pass with unlimited access to the VOD library. Here, teams can sell unlimited access to games at a higher price point. Parents and super fans can watch and replay games all season long.

Broadcast the championship game as a fund drive. Set a goal and communicate the progress of meeting that goal with donors. You may also want to consider setting up an affiliate program for team moms and social media influencers. These influencers have the ability to expand your team’s online presence to an audience you may not have reached before. Set up influencers with affiliate links and reward them for driving ticket sales.

During the fundraiser, remember to optimize revenue on your live stream. Promote pay-per-view tickets for the upcoming games and push VOD access. Teams can also sell merchandise like t-shirts, hats and team gear to boost revenue. Consider using the merchandise as an incentive for donations; for example, “receive a team calendar with each donation”.

During the fundraiser, upsell tournament packages. Instead of paying per game or purchasing VOD access, fans can view all games played at the tournament for a package fee. Offering a tournament as a separate package creates an additional revenue stream for these extra games. Offer sponsorships and advertising during the broadcasts. Sponsorships from local businesses can go a long way in raising money for your athletes. Place your sponsor’s logo in prime locations on the screen to ensure they are seen by viewers. Consider putting your premier sponsors on the scoreboard sign. Since there are empty stands these days, utilize that space to put up more advertisements to help bring in additional revenue. Broadcast advertisements before the game, during timeouts and breaks during the game. Thank your sponsors for their support. Consider holding a raffle to boost donations. Ask your sponsors to contribute to the raffle packages in return for additional exposure.

Tip: Choose a virtual platform that includes a “buy now” link embedded on the site for viewers to easily purchase merchandise, raffle tickets, and game access.

As Einstein once said, “in the midst of every crisis, lies great opportunity”, don’t miss the goal on this prime opportunity to engage raving fans and raise money for the team. Offering different levels of game access, hosting raffles, gaining sponsors and selling merchandise is sure to turn your team's passion into revenue. Leverage your club’s game broadcasts to supplement team costs. 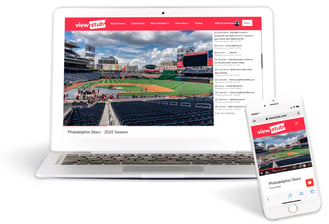 ViewStub is a virtual and hybrid event platform that makes it easy for event organizers to sell tickets to live events or sell access to pre-recorded sessions right from their website. ViewStub‘s all-in-one platform offers ticketing, registration, video streaming and new revenue opportunities for creators seeking to monetize their content and grow their community.

Virtual Event Formats – Match Your Format with Your Event Goals

Seemingly without warning, professional events, conferences and in-person meetings across the globe...

EventNEXT has been nothing more than a dream at the ViewStub headquarters for the past 2 years. The...